I was asked to write an article on my top ten books for the first half of the year. Readers love sharing the books we have read with brio, and are constantly on the look out for new recommendations. Here are some of the books that kickstarted 2018 for me – a compilation of my top ten books (in no particular order)  from the myriad ones I read in the first half of the year.

1) The Mirror of Wonders by Syed Rafiq Hussain

An anthology of stories peopled by animals, “The Mirror of Wonders” is a compilation of eight stories originally written in the Urdu language. The stories are set in the Terairegion of the Himalayan foothills, where Hussain was a hunter before he got into writing. Each of the stories is told from the vantage point of animals; humans move in an out and around and between it all. Hussain has beautifully showcased the ignominy of human behavior in these satirical tales. The translator has done a fabulous job, deftly bringing these stories to a larger reader audience with his nuanced translation. My rating: 5/5

2) My Sister Lives On The Mantelpiece by Anabel Pitcher

The story of a child who loses his sister in a bomb attack, and the aftermath of his crumbling family and difficult school life. This is the author’s debut novel and an absolute delightful read. Issues of racism, alcoholism, prejudices, parental abandonment, childhood grief, bullying are all delicately handled, and leave the reader with much to ponder upon after the completing the book. Laugh-out-loud in certain places, and heartbreaking in others, a much recommended read, this one. My rating : 5/5

Originally written in French, “Memory” is Grimbert’s autobiographical account of his family history amidst the Nazi occupation of France. The author’s parents jumped to their deaths from a balcony of their apartment building. Twenty years later, Grimbert wrote this novel about the memories and secrets that dominated their lives and drove them to the final leap. The author’s search to draw out the cold truths results in this hauntingly brilliant narrative. Every sentence has a lot of soul and depth to it and stays with you long after finishing the book. My rating: 5/5 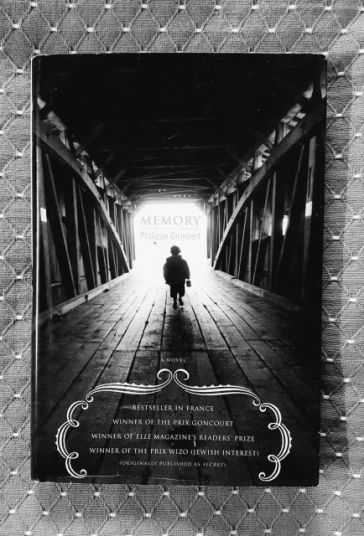 4) The Girl With The Green Tinted Hair by Gavin Whyte

A simplistic tale that revolves around the four seasons, but holds a lot more meaning than just changing weather. There are only two characters at any given point in the book – unnamed and referred to as “boy” and “girl”. This little gem of a book philosophizes on situations we encounter on a regular basis – people we meet everyday, things we see and hear frequently but do not pay much attention to, something seemingly mundane that we take for granted. The story teaches us to appreciate the present and live in the moment. Every moment is fleeting, and all good things come to an end to make way for better things. A very impactful read. My rating: 4/5

I love books about books! You get introduced to new titles and authors, or new books by authors you’ve already read before, as well as recollect books read years ago, or those you meant to read but forgot about and now that they’re in front of you, you can’t help picking them up. In “Second Thoughts”, Navtej Sarna introduces us to “literary pilgrims” – people who plan trips around places mentioned in books, travel to places where authors lived, visit local bookstores while on holiday, and meet authors. If you find yourself doing any of the aforementioned, this book is a must read for you. My rating: 5/5 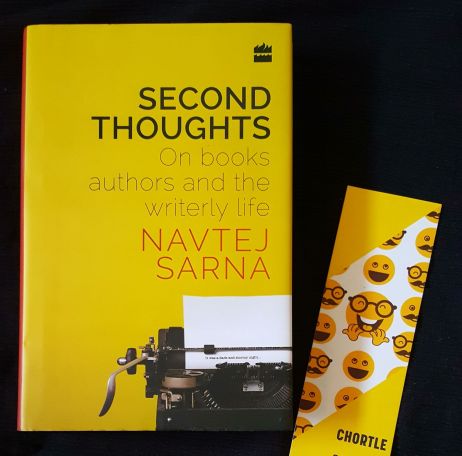 6) The Reason I Jump by Naoki Higashida

The month of April is celebrated as Autism Awareness Month, and I had picked this up as one of my endeavors to learn and educate about autism – a subject I had worked on for my thesis. Originally in Japanese, the book is on autism, written by a person with autism, translated by the parents of a child with autism. The book follows a conversational pattern, with Naoki presenting answers as descriptions to commonly asked questions and dilemmas faced by non-autistic people who do not know how to interact with a person with autism. This is a highly recommended book for those who work with people with autism, or have a loved one on the spectrum, and most importantly for non-autistics to do away with any misconceptions regarding the condition. My rating: 4/5

A tragicomedy play originally written in Kannada and translated into English by the same writer, which is a delight for readers. Said to be a retelling of Thomas Mann’s “The Transposed Heads”, the narrative presents the differentiation between body and soul, and questions the philosophy that holds the head superior to the body. It is about human identity in a world of tangled relationships. An excellent play that raises the question of what completes a being. My rating: 5/5

8) Son Of The Thundercloud by Easterine Kire

Easterine Kire is one of the most prominent voices of Naga literature, and uses her lyrical storytelling skills to weave this novel based on the magic and wisdom of Naga legends. What we get in turn, is a beautiful fable with a moral. A wonderfully written ode to storytellers, a pilgrimage into the myths and legends of a land, an intricately woven and magnificently presented fable that leaves a long lasting impression on the reader’s mind. My rating: 5/5 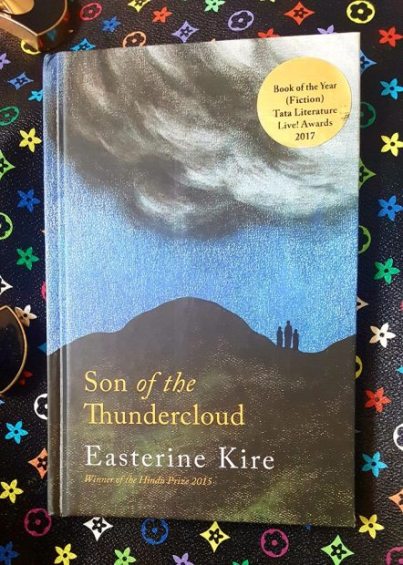 I had picked this one as an ode to Mother’s Day, and the book is a treat to all mums who are athletes and fitness enthusiasts, and do not want childbirth to bring an end to their sporting endeavors. Moire O’Sullivan is a mountain biker, runner and kayaking enthusiast from Ireland, and the book highlights her experiences from the births of both her children – how she trained pre-conception, during pregnancy, and post delivery – and the races she undertook during those years. My rating: 5/5 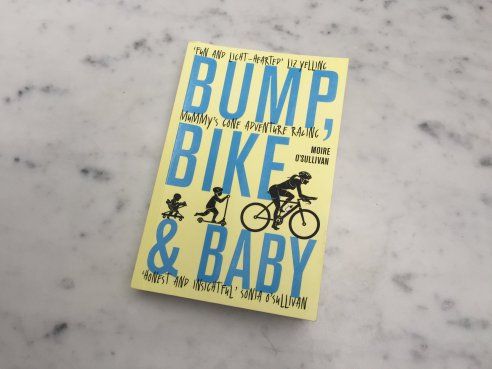 10) Skating Through by Jennifer Cosgrove

A heartwarming tale which is essentially a coming out story, “Skating Through” delves into the topics of homosexuality and sports. Though creating a story revolving around serious themes, it isn’t filled with angst throughout and has it’s share of lighthearted moments. A great read for anyone looking for books that cover the LGBTQ community – great concept, story and characterization. My rating: 4/5 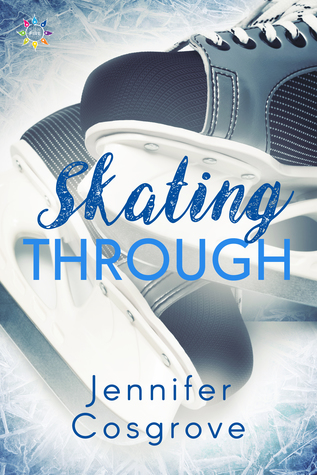 So these were some of the books that stood out for me in the first six months of the year – a mix of fiction, non-fiction, anthologies, novels, memoirs and plays. What have been some of your favorite books so far this year? 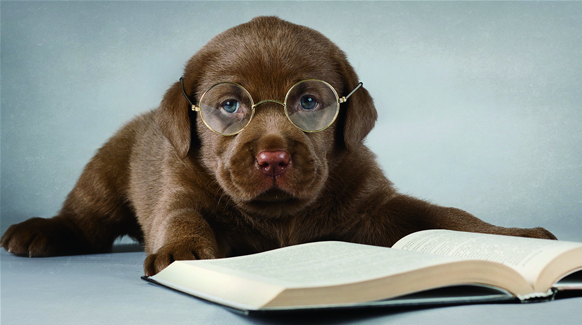 So, there’s this Seven Day Book Challenge that has been doing the rounds lately. I have no idea where it started from or by whom, but people have been challenging fellow readers around the world to click and share pictures of seven of their favorite books. You need to be challenged by a friend, and in turn challenge another bibliophile to continue the game of tag. (The terms ‘nomination’ and ‘invitation’ have also been thrown around.) The criteria involves taking a photograph of only the book cover – no blurbs, quotes, excerpts, reviews, narratives of how you came across the book, who gave it to you, where you picked it up from, or any sort of explanation related to why that particular book is one among your favorites. All one needs to share is a picture of the book cover.

Now as avid readers, we always have a lot to say about our books. We would read anyways, even without being challenged. And for someone who reads about seven books in two months, identifying seven books from those read over a lifetime is quite a task. I personally don’t follow any of these “challenges” that do the rounds on social media – It means having to take out time to perform the activity, and log in daily to share updates of the same; something I don’t usually have the time for. Even when it comes to “Reading Challenges” which set themes for books to be read, I prefer setting my own reading goals. Books are always handy, though, and bookworms love showing them off – new books bought, visits to bookstores, thrift scores from second-hand shops, gifts from friends – we love sharing and seeing what others are reading which can be discussed at length if read, or added to the list if not.

Here’s what I came up with for the Seven Day Book Challenge. I read just about anything – across genres and languages – and I’m usually intuitively good at picking great reads, so most of what I read is highly recommended. I could come up with these “seven day” lists everyday! For those of you who haven’t come across this book challenge yet, the pupper above challenges you – Which seven books would you list, if you had to recommend a book for each day of the week? Here’s my list, or rather pictures since that was the requirement of the challenge. 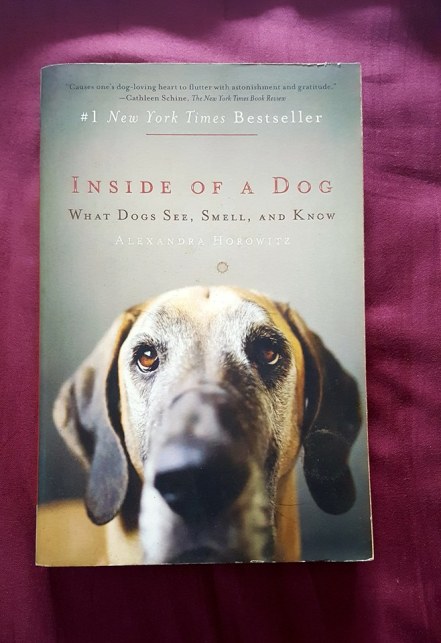