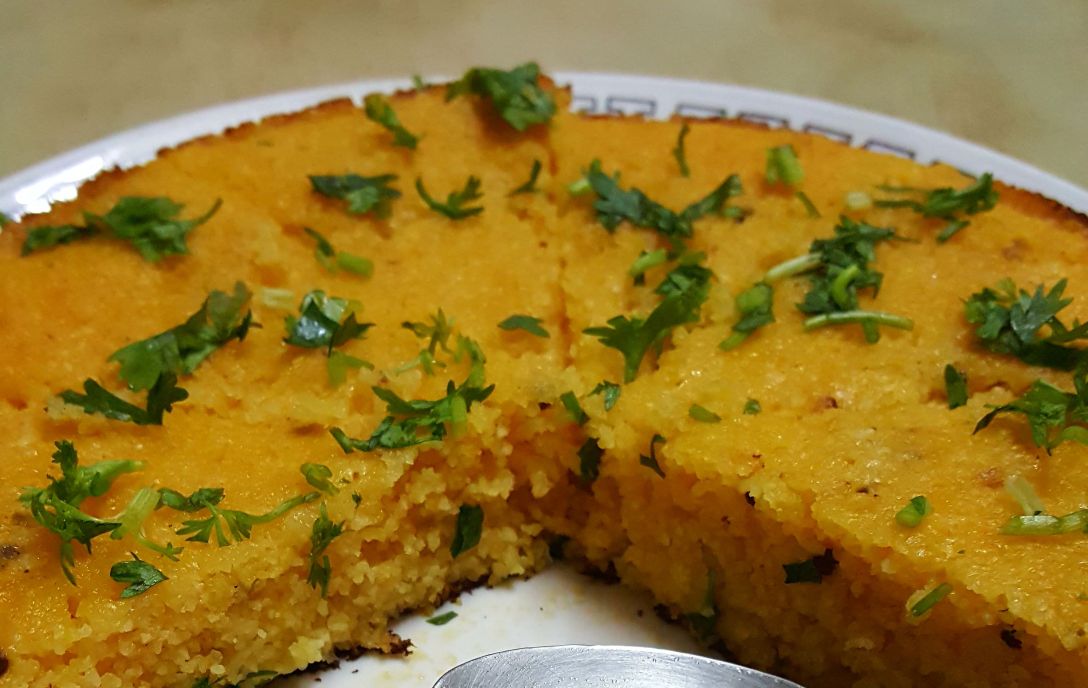 Weekends are a time for trying out new recipes and experimenting in the kitchen. I love baking and usually tinker with sweet dishes, but had some extra time on hand yesterday and tried out this savory preparation for breakfast.

Handvo is a vegetable cake originating from Western India – a part of the cuisine specific to the state of Gujarat. It is often made with bottle gourd, though other vegetables can also be used as filling. The commonly used ingredients are wheat flour or rice, a mixture of lentils, bottle gourd and/or other vegetables and sesame seeds, making this a wholesome meal to enjoy by itself or with a side of pickle or chutney.

There are four parts to the ingredients – the dough, the vegetables, the tempering, and the garnishing. For the dough, rice and gram were soaked the previous day for a few hours, ground, and then left to ferment overnight with yogurt. Bottle gourd, carrots and ginger were peeled and grated, fenugreek leaves were finely chopped, and green chillies were crushed. A tempering was made by heating oil, adding mustard seeds and turning off the heat once they started spluttering. Sesame seeds and dried red chillies were added, followed by all the remaining ingredients assembled earlier. The medley of food components were mixed well.

With an oven pre-heated and a baking pan greased, baking soda needs to be added just before you are ready to pour the batter into the pan. Sesame seeds were sprinkled on top and the mixture was baked for about half an hour. (The top needs to turn crispy brown – baking could take anywhere between twenty-five to forty-five minutes.) It was left to cool for about twenty minutes before removing from the pan. I sprinkled chopped coriander leaves on top before serving. Additional sesame seeds or flaxseed powder can be added to the garnish, if desired.

Handvo is usually prepared and served as a cake. I baked the mixture in two sets, resulting in two “flattened cakes” instead of one thick one. It does not affect the taste – I just wanted to start eating while the second lot was still in the oven, and the flatter version baked faster. And this is a very nutritious meal – with it’s assortment of grains, seeds and vegetables, and the fact that it is baked. Minimal oil is used for the tempering.

Considering the time required for soaking and fermenting the grains, and baking the entire mixture, this is a longish meal preparation. The ingredients, however, are mixed and set aside and the dish otherwise does not take up too much of time. Give this one a go if you like trying cuisines from around the world and are looking for healthy alternatives.