The week took off with a spectacular start. I ran my first timed race on Sunday, since the accident last year. For those who are unfamiliar or have recently begun following this blog, I had an accident last August and suffered from nerve damage with subsequent paralysis of the right leg – from hip to foot. I had resumed running earlier but wasn’t yet racing. Sunday’s event marked a comeback to racing. A measly distance compared to the marathon distance I am usually accustomed to, but some start is better than no improvement at all.

The race was tricky, as expected. I had practiced the distance in training runs, but in events one needs to be aware of other racers as well. Some runners overtake you and suddenly stop right in front of you, others sway from one side of the road to the other when they spot photographers, not to forget those who throw disposable water bottles in the middle of the road. Racing throws its own set of challenges, besides the training the body and mind undergo. The weather on Sunday was 34°C, with a humidity of 59% – the monsoons began waning a few weeks ago with some abrupt showers in between, but overall the weather was hot and humid. I did take several walk breaks through the course – the race strategy being more of a walk-jog rather than high speed running. The goal here was to return to race mode and finish injury free. I’m working with distances at the moment instead of speed, having being warned of a possible nerve compression recurring.

Each medal comes with it’s own story, and means much more than merely the name of the place or date of the race. A medal is a reminder of how the run was, the people you met, the challenges you overcame, and your entire journey to get to that place and pace. Another cherished one added to the seven year old collection.

And of course, one can’t fail to mention the support of the running community, where friends are almost like family. Long distance runners have their own training routes, and events bring everyone on the road together. I had met many people on practice runs, but had missed many others who would usually connect through races. It was great catching up with all. The official race pictures are not yet out – I’ll post some running ones when I get my hands on them. Just a few friendly ones for now. 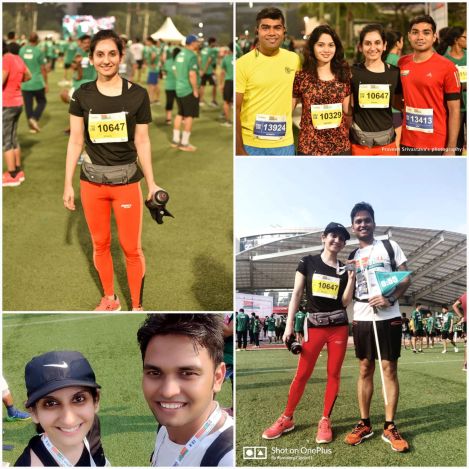